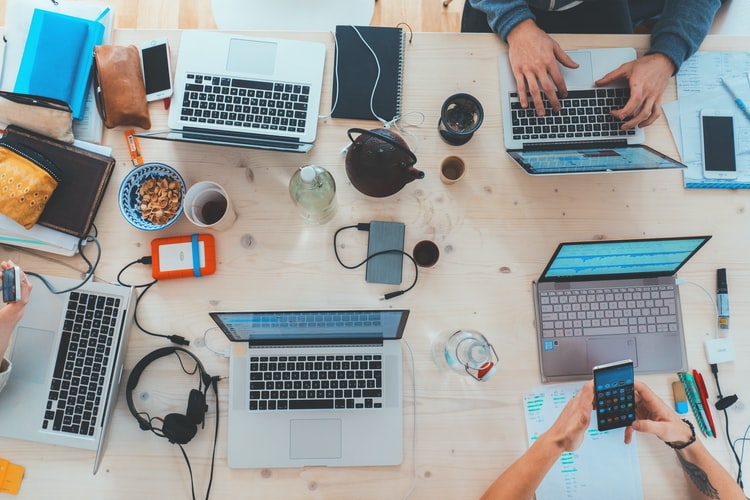 Women’s Month is every month at Hustle Digital

Of course, our own Inge Swain has thrived through years of experience in digital strategy, project management and operations – and is now a director at Hustle. Inge puts the ‘zoom’ in Zoom meetings and really knows how to simplify complex communications.

“Since embarking on the business-ownership rollercoaster two years ago, and taking the plunge to work on Hustle Digital full-time, I’ve been working primarily from home. I’ve swapped post-work happy hour, for mid-morning gardening. My colleagues are my dogs and my desk is shared by a needy cat. It’s great,” says Inge.

“That wasn’t meant to sound sarcastic. I genuinely love it. I 100% believe remote-working is the way of the future and the pandemic has taught us it’s completely workable. I hope spending hours in traffic each day will be remembered as a relic of the before times,” says Inge.

Julia Harris, or ‘Harro’ for short, sports a peculiar penchant for the middle names of famous – and obscure – sportspeople. Julia really wants you to know that Makazole Mapimpi’s middle name is Drex. She’s well-travelled, having worked as an analyst in Australia and the United States. Julia ‘famously’ ‘discovered’ Tim Paine in her early years as a cricket writer. Paine’s middle name is David, by the way. We’re glad Julia is back in South Africa, working as a Reader Revenue Lead for Arena Holdings (formerly Tiso Blackstar Group) – and hacking it at Ultimate Frisbee.

“I have found it important to find a balance between being proud of being a woman and not letting that define my career. Starting out in a very male-dominated industry, I didn’t want to be judged on the basis of being a woman. So I didn’t think of myself as being a female sports reporter, rather I focused on being the best reporter I could be, believing that would be enough. I was lucky to have the support of editors who backed me and this was crucial in giving me the confidence to take this approach,” says Julia.

“When it comes down to it, I want to reach my career goals because I am good at what I do, not because I am a woman and a company was looking for gender diversity. I think it’s important for women to remember that equal opportunity and equal outcomes are not the same thing. As more opportunities become available to women, we need to show that we have what it takes to thrive in any company or industry,” says Julia.

From Fox Sports Asia and Cricket365 to Planet F1 and Tennis365, Shahida Jacobs hasn’t worked plenty of top-flight sports websites. Shahida is a veritable whizz during any and every sports quiz, personalised meme creator and cliche generator. Did you know Eibar has the smallest stadium – capacity-wise – among all La Liga teams? We also didn’t know, until Shahida told us. She is a diehard Liverpool fan. Convenient, indeed, in 2020.

“We have come a long way from it being an anomaly to see women in sports journalism or for us being considered token appointments, but there is still room for improvement,” says Shahida.

Antoinette was ‘pivoting to digital’ way, way before it became the overkilled buzz term it is today. Content is king, they say, but it has taken the queen of Extra Time Media, Antoinette, to really monetise that content. Her infatuation with The Sims video games is just one recent example of turning passion into profit. We’ve worked with Antoinette via Blue Sky Publishing and look forward to benefitting from and complementing her expertise again in the future.

“Digital boundaries will keep you (somewhat) sane. Have hard rules that allow you disconnect as often as possible. No WhatsApp work conversations on your personal number or whatever. And know your worth. Turning down something, even when it doesn’t sit quite right, is one of the most challenging things to do when you are trying to get a foot in the door. But your mental health will thank you years down the line,” says Antoinette.

Want to know when we got
news on our latest product

For our news letter now